For exploration
DEVICES
SHOP BY TYPE

For body exploration
SHOP ALL
By categoryNewPride 🏳️‍🌈LubricantsBodyCondomsDevicesGiftsBundlesSave
By activity

Exploring yourself
BLOG
About

The story of Roam

For people & the planet

We have collected data from over 40 shows and found areas where the media still needs to improve to become more inclusive when referring to sex.

BY THE ROAM TEAM 10 MIN READ

How do our favourite TV shows portray sex?

Roam is invested in its mission to create a healthy, inclusive conversation around sex and sexual wellness. The content we consume on TV is a vital contributor to these conversations. Although many of us will frequently watch shows portraying sexual scenes, how often do these shows talk about all of the important issues surrounding sexual consent, protection and pleasure or represent non-heterosexual encounters?

We wanted to find out which shows discuss sex the most, how they portray discussions surrounding consent and protection, and how they show non-heteronormative sexualities on screen. Here is what we found.

How we did it

Roam scraped TV scripts from over 40 shows, 200 seasons, and 3000 episodes to analyse 10 million lines of dialogue. The scripts searched for sex-related keywords, falling into the categories of sexual acts, contraception, sexuality and sexual identity, sexuality prejudice, consent, and pornography.

We then pulled this data together to discover which shows covered these topics the most, and where media still needs to improve to become more inclusive. 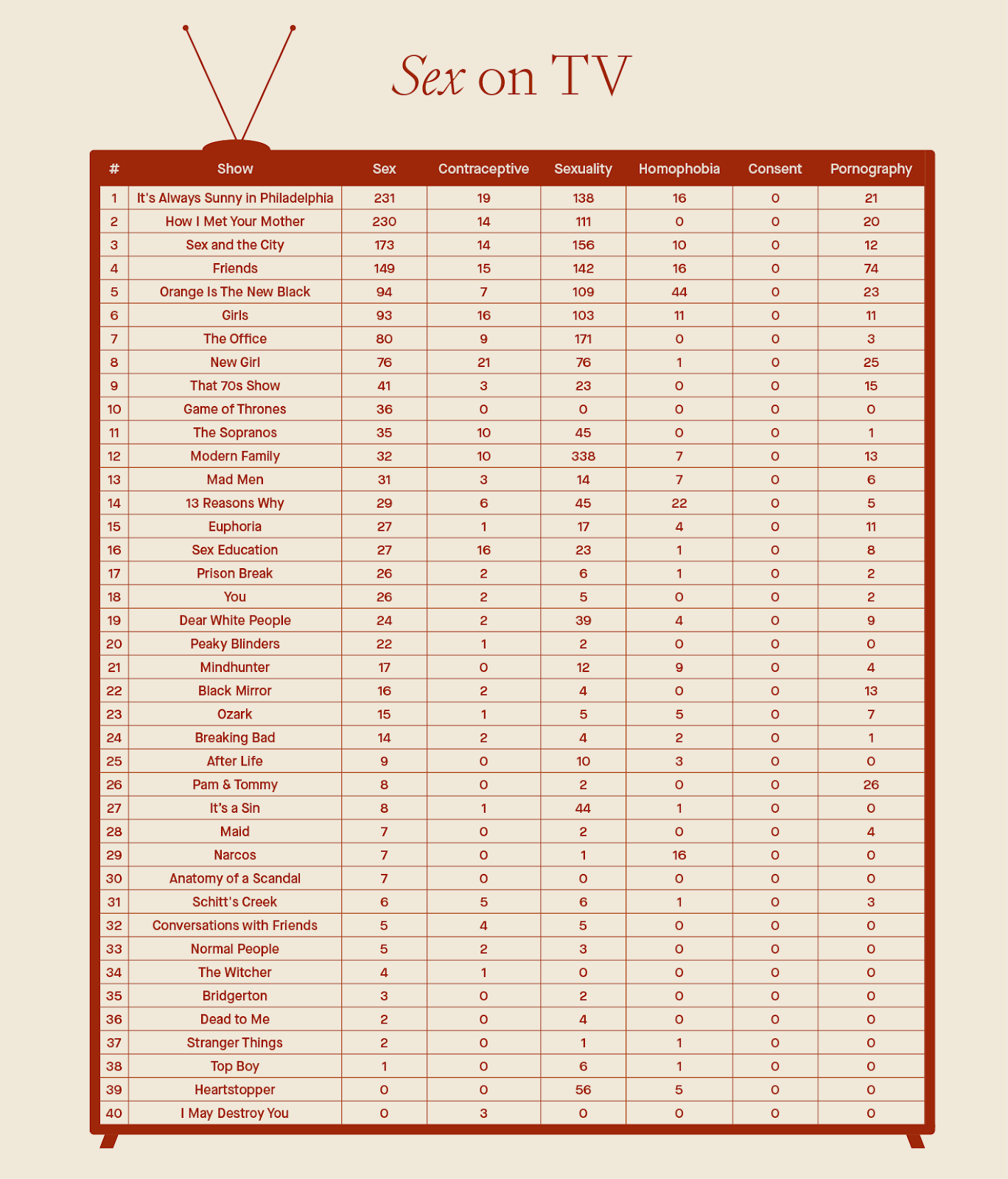 Conversations about sex: Which shows mention sex the highest number of times?

Sex is a hot topic - almost everyone is talking about it in some capacity and our favourite TV shows are no different. We first looked at which series mention sex in their dialogue the highest number of times over their entire run.

Out of the 40 different shows we analysed, critically-acclaimed US sitcom It’s Always Sunny In Philadelphia mentioned sex in all of its forms the most times with 231 mentions. The show first aired in 2005 and is still running today. 2005 was a different era and conversations around sex and sexuality representation weren’t as inclusive as they are today but this beloved sitcom is well known for its dark and crude sense of humor.

“What are you doing? You cannot seriously be thinking about banging this old lady” - Season 3

The sitcom that came in second place for the number of times sex is referenced in its dialogue is How I Met Your Mother. This romantic comedy aired from 2005 to 2014 and is remembered for its unique storytelling. It was nominated for 91 awards over the time it aired and received a lot of positive feedback.

“Ted, these chicks are desperate and hot. That's a perfect cocktail. Shake well, then sleep with.” - Season 1

Unsurprisingly, the romantic comedy-drama, Sex and the City, ranks third for the number of times sex is mentioned on-screen. This raunchy series originally aired between 1998 and 2004, and was considered really progressive for its time. It is still shown daily in many countries due to its continued popularity. Much like the other series we’ve covered, Sex and the City is a product of its time and although it covered topics rarely discussed on other series, the conversation around sex and sexuality has changed a lot since it was on the air.

Why is ‘consent’ not mentioned explicitly on our screens?

Something you will likely notice about our data is that not one of the shows we analysed explicitly mentioned the word ‘consent’ - or any of its related terms - in the dialogue.  However, this doesn’t mean it wasn’t spoken about in other ways.

For example, some shows we analysed may have portrayed characters asking for consent using alternative phrases such as ‘is this okay?’ or ‘do you like that?’ Both of which are great ways to ask for sexual consent and may feel like the most natural way to do so in the moment.

However, the lack of consent terms highlights that none of these shows are labelling their portrayals of consent explicitly. This could potentially be confusing for audiences who are less sexually educated or experienced and who may only be starting to figure out what this means for them.

Roam also sat down with Juliette Karaman, certified mind and body coach and writer on relationships, sex, and intimacy to discuss the study. She added:

“We live in a society oriented to the following thoughts: “Once we are together (in a relationship), then, of course, I have your blanket consent.” But nowadays, we need to be more aware that anyone can change their mind. It would be great if we could start having clear discussions about consent and talk with the partner before doing something. It's all about communication. We can check in, even with our long-term partners by clearly explaining what we want more, e.g. “Please touch my mouth and breasts, but don't touch my vulva and vagina”. If TV shows begin to incorporate this more into their dialogue, it will show the rest of the population that this is normal”

How much is the use of contraception portrayed on TV? 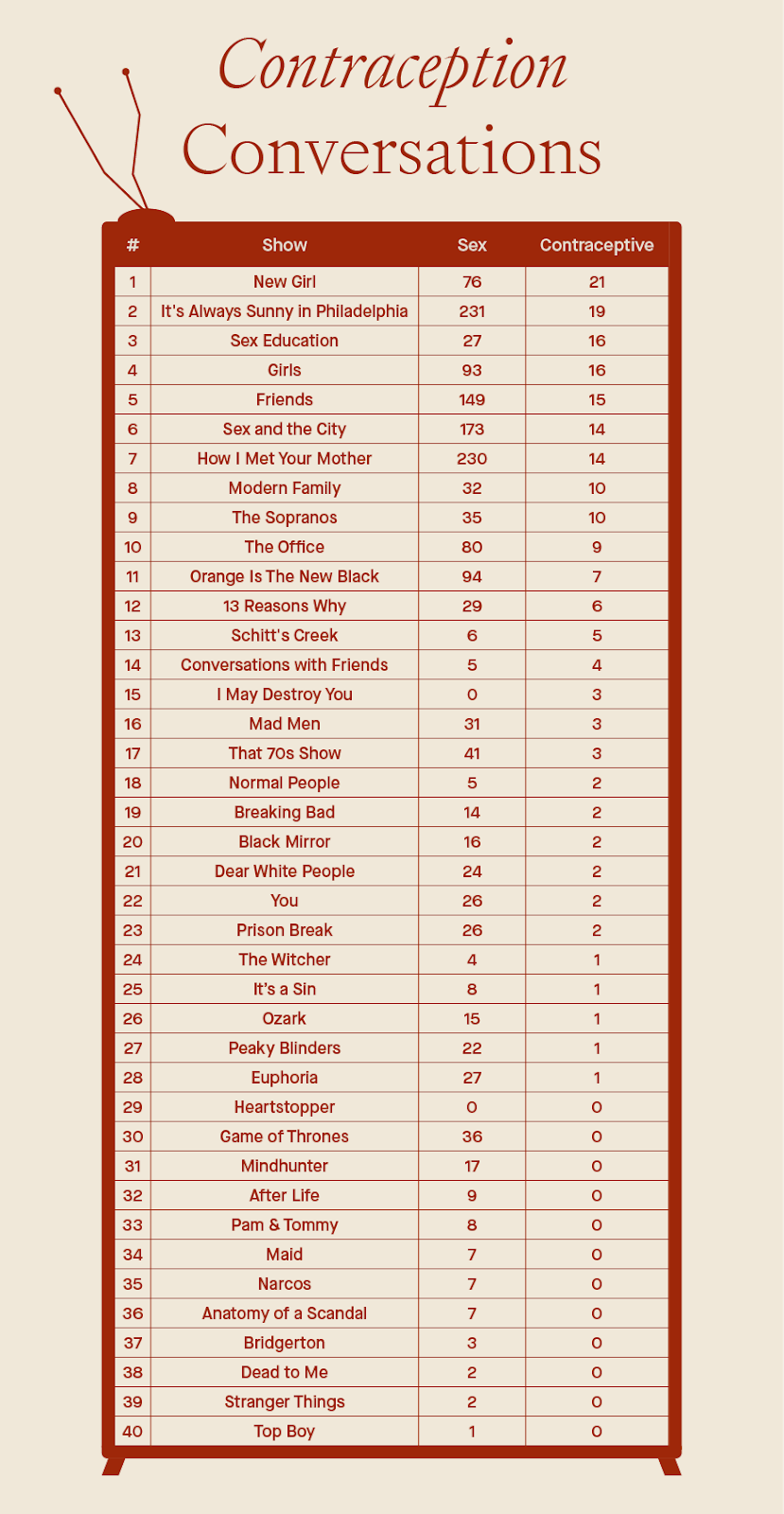 Contraception is vital to exploring sexual pleasure, without putting yourself at risk of unwanted pregnancy or sexually transmitted infections. A common method often referred to on TV is the use of condoms. Though it may not be relevant to discuss contraception in every sex scene on TV, the comparison between the number of times shows are mentioning sexual acts versus the number of times contraception is discussed illustrates its under-representation, despite its importance in many sexual relationships.

The BBC’s recent adaption of Sally Rooney’s novel, ‘Conversations with Friends’, notably mentions contraception an equal number of times to sex in the show's dialogue, making it an exceptional example of how this dialogue can be included without impacting the flow of the script.

Juliette Karaman added: “It is massively important to talk about contraception and Sexually Transmitted Infections (STIs), to be open and say:“ What is your sexual health? Let’s be honest about this and let’s talk about it. How are we going to do this? Are you on the pill? Let's use condoms?”. We need to normalize talking about contraception and sexual health in the media too, so that it becomes a much more common way to talk about sex.”

Conversations with Friends: “Do you always use condoms?”- “I've never had unprotected sex”

How I Met Your Mother: “It could be sooner, we're not that careful with our birth control” - Season 1

It’s Always Sunny in Philadelphia: I'll wear the goddamn condom, but I'm not psyched about it.” - Season 4

New Girl: “No, I need a condom! For my penis! What are you doing? Okay, we are not close enough for this…” -Season 2 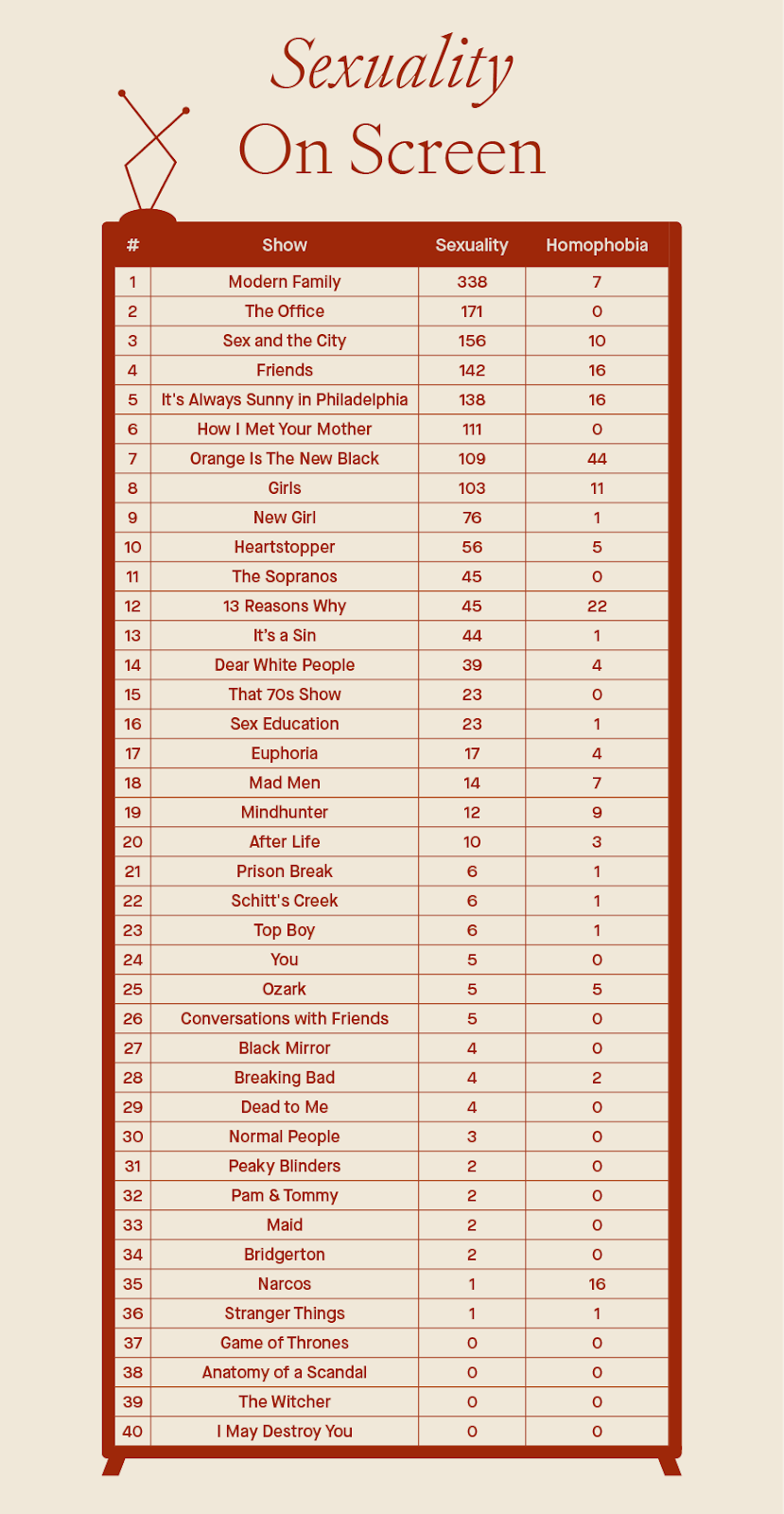 Although an increasing number of shows are beginning to portray different sexualities in a better light, there is still great room for improvement across the industry.

When television was first introduced almost 100 years ago, the mention or portrayal of sex was completely banned from the screens. Gradually, this shifted and performative sex between cisgender and heteronormative couples became more accepted. It has taken a long time for the entertainment industry to begin representing more sexualities and there’s plenty more work to be done.

Surprisingly, the mockumentary-style American sitcom ‘Modern Family’, which only mentions sexual acts within its dialogue a limited number of times, mentions homosexuality the most frequently out of all the shows we analysed. This is likely because of the homosexual relationship between the lead characters Cameron and Mitchell.

The show originally aired in 2009, the same year that California’s Prop 8 was passed, meaning that legal marriage equality would be delayed for another 6 years. This context is vital to understanding the potential impact that the representation of an LGBTQ+ couple had at the time, helping watchers to feel more seen and heard.

There has been a lot of progress in terms of LGBTQ+ representation in the entertainment industry however portraying sexual prejudice can also be an important part of this conversation. While some of the shows we analysed portrayed homophobia, transphobia, biphobia and acephobia from a positive and educational perspective, some shows also used derogatory terms as part of the main dialogue.

But it’s not all doom and gloom and we can see the tides turning. We looked at the top shows that discussed female pleasure, orgasms, and oral sex and found that Netflix’s Sex Education talked about pleasure almost equally, with female pleasure being discussed 24 times and male pleasure having the spotlight 20 times.

The tides are turning slowly, but media representation is an important part of battling the overwhelming narrative that sex is an act meant to serve and pleasure the heterosexual man so there’s still a lot to be done to make this discussion more equal.

The Sopranos: “I don't understand why I always have to ask him for oral sex.” - Season 1 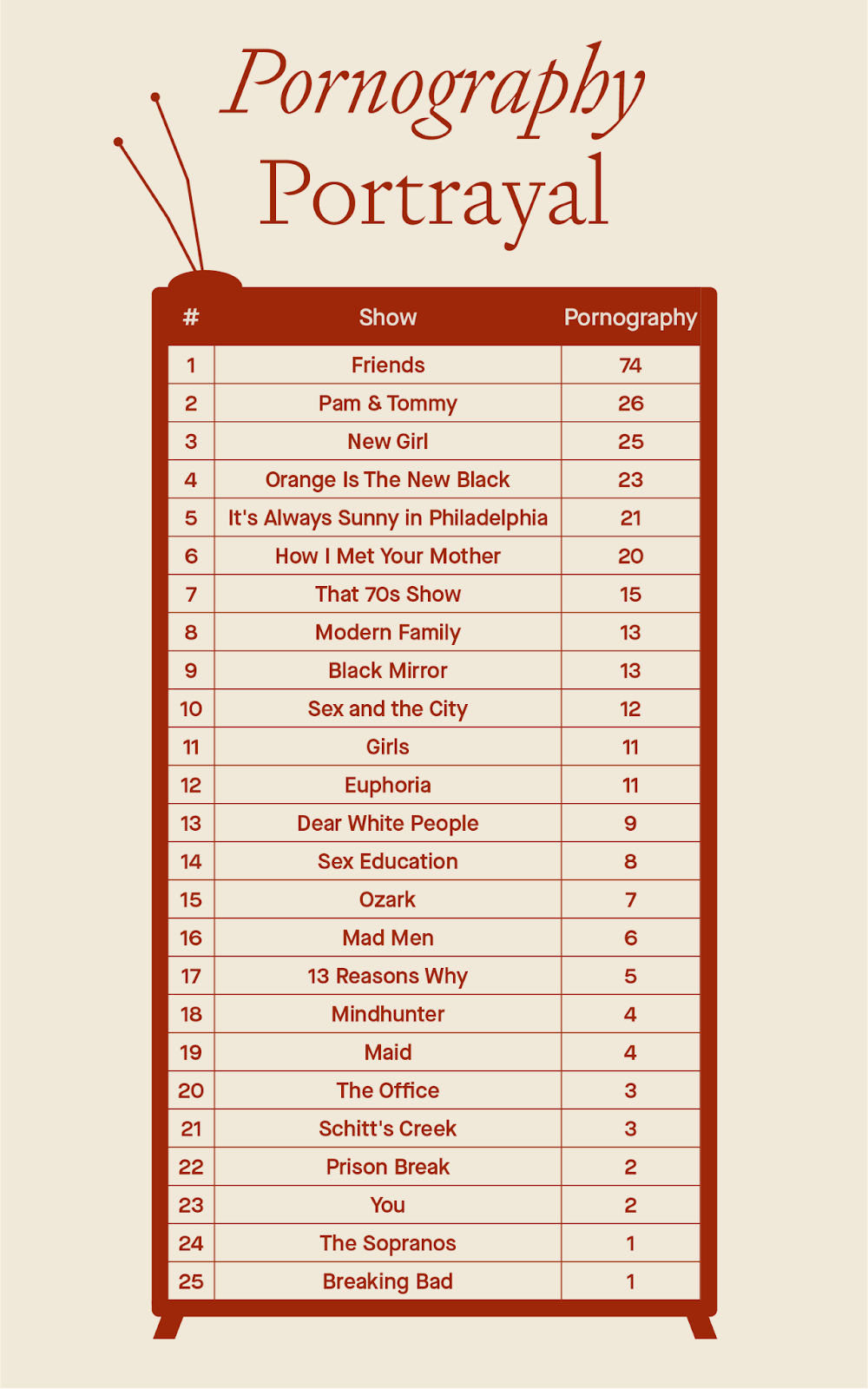 The portrayal of sex workers and the sex industry as a whole in the media remains somewhat troubling, with sex workers and pornography used to make jokes or as part of a tragic character backstory.

“In the vast majority of their programming, sex workers are treated one of two ways: as punching bags or punchlines” - Refinery 29

American sitcom, ‘Friends’, aired from 1994-2004, but remains syndicated on our screens on a daily basis almost 20 years after airing its final episode. Though the show has faced a lot of criticism for its under-representation of different groups and offensive jokes in recent years, the show remains popular and is now seen as a product of its time, along with many other shows produced in the same era.

We were surprised to see that the show mentioned pornography 74 times, with Pam & Tommy, a more recent series with a story revolving around a leaked sex tape, coming in second place - with only 26 mentions. This is probably due to longevity, rather than the actual content, as Friends aired for almost 10 years whereas Pam & Tommy has only had a single season so far. It’s still surprising, however, because pornography was not vital to the overall narrative of Friends and was, at times, the butt of many jokes.

Your go-to gift guide this Christmas

Does the weather affect your libido?

How to have sex at the in-laws this Christmas

Not sure?
We’ll help you explore

I want to play

TAKE OUR QUIZ
Roam exists to make the world a more sex positive place and makes products to support healthy sexual exploration for all.
Get intimacy tips and offersSIGN UPBy signing up, you agree to e-mail marketing. You can opt-out at any time. Read more in our Privacy Policy
SHOPLubeCondomsVibesShop all
HELPContactFAQsPrivacy PolicyTerms of ServiceReturns Policy
YOUAccount
USAboutMissionBlog
2022 Roam. All Rights Reserved.
Terms & ConditionsPrivacy PolicyReturns Policy
Site by HeyHiHello